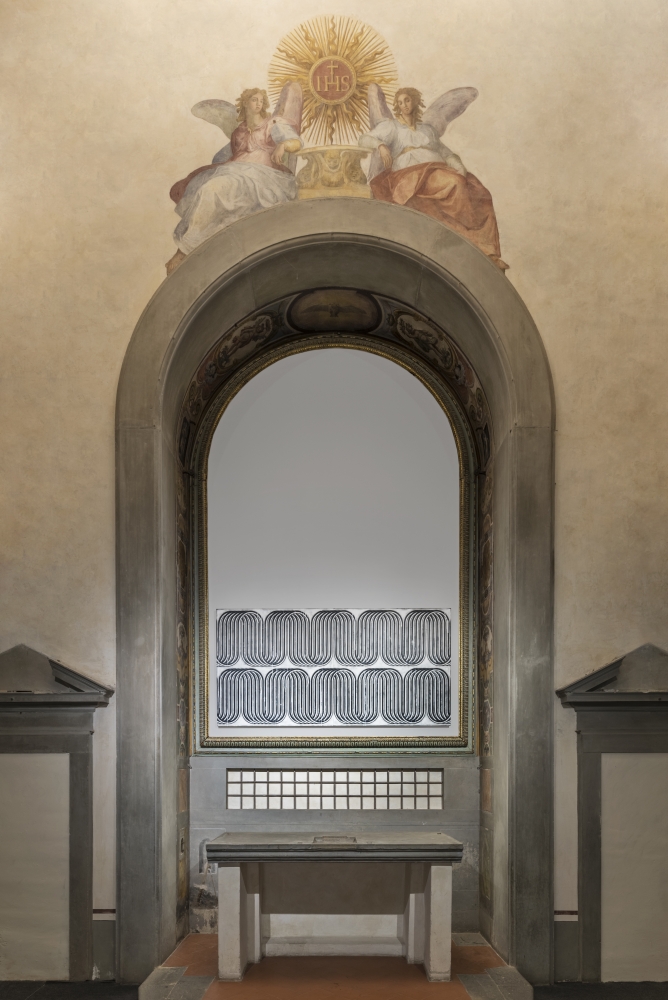 In the Duel exhibition series in Florence’s Museo Novecento, guest curators are invited to work with internationally recognised artists to create site-specific works inspired by the museum’s collection. The title of the project is meant to evoke a dialectical ‘duel’ between contemporary artists and the civic museum’s holdings. The fifth exhibition in the series, titled L’Attesa, includes the artist Davide Balliano (Turin, 1983) and, as special guest curator, the museum’s artistic director Sergio Risaliti.

The exhibition develops from a dialogue with Arturo Martini’s sculpture Susanna (c. 1935) and explores the theme of waiting. In Balliano’s view, the archaic style of the work strikes a deep chord with its almost primitive features, but at the same time stirs the soul with an infinite sweetness, in perfect harmony with its name: Susanna, Lily, symbol of purity. A meaning, points out Risaliti, that also references the city of Florence and modernism, which has always looked to the purity of figurative language to avoid being overwhelmed by reality and history.

The works that Davide Balliano (Turin, 1983) has selected to duel with Arturo Martini (Treviso, 1889 – Milan, 1947) are a group of new pieces (seven paintings and a sculpture) and a series of photographs documenting past performances. The exhibition creates a dialogue with a sculpture made of Pietra di Finale by Martini around 1935, and explores the theme of waiting.

Martini’s work depicts the Biblical Susanna, captured in a contemplative pose. The figure looks into the distance, awaiting an unknown, inward or outward event. In dialogue with Susanna, Balliano has selected a new sculpture in glossy steel, hollow like a cylinder or a container that has been cut in half. The mirror-like surface of the steel reflects and absorbs everything in the space. Although the container—in formal terms, a minimal, abstract work—cannot be filled with objects, things, or people, it is instead filled with the reality reflected upon the metal’s surface. In this way, the sculpture can also be said to function like a painting.

Indeed, all of Balliano’s work straddles the thin line between painting and sculpture, exploring existential, current themes like human identity in the age of technology and our relationship with the sublime, using an austere, minimal language constructed around abstract shapes in powerful dialogue with the architecture.

References to Minimalism and the vocabulary of abstraction are also found in his paintings, which undergo a kind of distortion towards the reality and existence, themes which Balliano does not want to separate or distance himself from, through the recourse to of logic and a cold, detached language.

At first, the painstaking paintings, which are the result of what the artist describes as a monastic practice, seem to be orderly and precise; upon closer inspection, we find scratches and abrasions that reveal the wooden surface below, almost as if it were the deteriorating facade of abandoned modernist intentions.

Behind the curtain of pure formalism that the works seem to reference, the artist reveals that he has actually embraced the influence of time, the vicissitudes of life and even everyday emotions.

The exhibition is rounded out by photographs documenting three actions from the artist’s project Giving my back to the night I heard you lying to a giant, which reflects on the mystery of awaiting sleep. ; An everyday ritual during which we try to renounce everything that we are, relinquishing control of our bodies, rational thought and the principle that binds cause and effect, bursting into the madness of dreams.