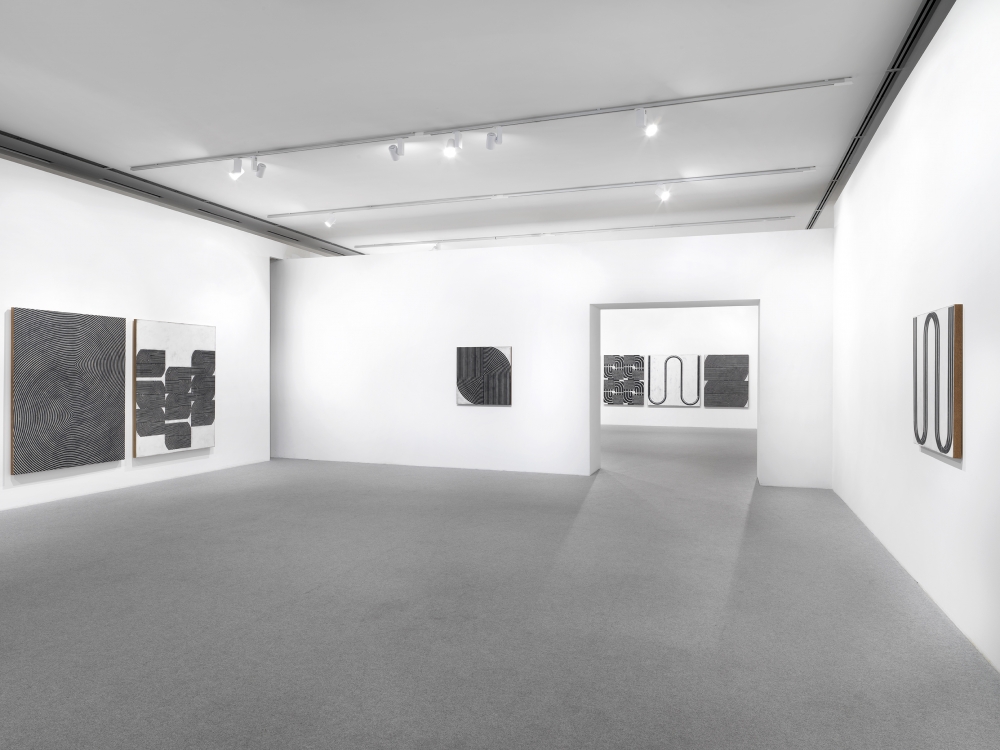 The MARCA, Museo delle Arti Catanzaro, is proud to announce Building Body, the first Italian museum solo exhibition by Davide Balliano. In conjunction with the opening (September 15 2018) will be launched the first monographs by the artist, published for the exhibition.

Davide Balliano's painting process involving the use of black gesso and plaster produces diverse geometric shapes - halved arches, spirals, baroque and modernist architectural details - on multiple layers. The graphic aspect of his work is a form of preliminary writing submitted during the phases of creation, evolving through a progressive alteration which acts through the partial erosion of the margins of the geometric shapes, the irruption of drippings, scratches and irregular details. It is a process that subdues the two-dimensional form of the painting to an entropic alteration, opening it to a multiplicity of mutations and expressive solutions. One of the results of this controlled disorder practice is to push Balliano’s painting towards hybrid and multidimensional spaces, which cannot be recorded within the boundaries of bi-dimensionality. From the use of the underlying material, wooden boards instead of canvases, his works seem to formally resist not only the 20th century flatness canon, but also the identification with a univocal and literal dimension of painting. In fact, the overcoming of a rigid classification in terms of base multiplied by height establishes a spatial dimension that draws to itself a multiplicity of plastic and material elements, giving shape to an experience not limited to visual perception alone.

In Balliano there is the awareness of a refusal of a strictly rationalist interpretation of painting, and in this detachment one understands the artist’s distance from the belief in the principles of literalness typical of the grammar of abstract modernism of the 20th century. It is the genetic matrix of the artist’s painting that searches for three-dimensional allusions, through irregularities, multiple color layering and strata of heterogeneous materials. Thus, two syntactic elements dominate his pictorial action: the formal approach and its dissolution, the canon of the geometric model and its negation, like a heresy that ends the possibility of reaching a definitive dogma every time. Every table by Balliano is a dimension in the making, a field of action where the artist intervenes, instructing a creative process that strays very far from the hypothesis of a geometric formalism to burst into a space of transformation. The artist’s works are an attempt at mediating with entropy that determines every area of human and natural experience. Each piece opens to variable perceptual scenarios, alternating between predefined forms and their imperfections, clear surfaces and abrasions. The works resulting from this evolution become a synthesis of tactile possibilities and architectural references, demonstrating how non-figurative painting does not escape the elaboration of the real but is the result of a more intense interaction with its data.