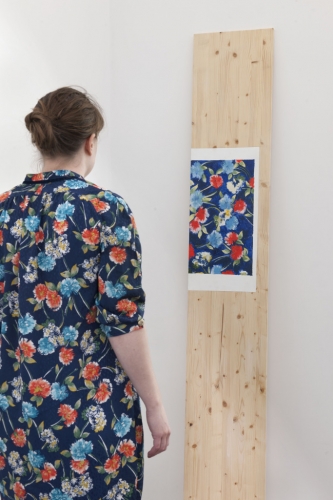 While Smoke, Nearby, an exhibition of work by Mexico City-based Tania Pérez Córdova, which recently opened at the Museum of Contemporary Art Chicago, marks the artist’s first solo appearance in the United States, the show feels like somewhat of a homecoming. This affect is perhaps common for those who have considered Córdova’s work—emphasizing an intensely personal read, the artist nearly forces the viewer’s hand toward familiarity—her highly-edited forms and discreet titles reveal a calculated withholding of context. To engage deeply with Córdova’s still-life sculptures and serial photography is to feel at home; imbuing her objects with introverted narratives, and placing them within remembered interiors or memory-landscapes, the works perform as largely abstracted and non-functional assemblages.

Indeed, her work is often referred to as filmic, in that its narrative threads gesture to actions off screen—latent in the object, but within a cinematic language. Córdova is a highly exacting director: to create empathy with the object she places before a viewer, she knows she must produce an immediate relationship between viewer and sculpture. That act of relating is produced through the withholding of information, a blank slate for the viewer to project onto.

As a viewer, I find myself doing the same— unavoidably sinking into nostalgia via the minute details offered. In We focus on a woman facing sideways (2014), a single earring dangles from an elegant wire armature. The sculpture recalls a particular memory of the artist’s, of a plant named Stella that belonged to a friend in her sophomore year of college, adorned with a single earring that dangles delicately from a long but sturdy green leaf. And suddenly I feel at home, in this memory. The woman facing sideways becomes the plant Stella in the abstract, and the void of a woman who is not there becomes the space in which a personal memory is held.

On view in the exhibition—a sparse yet wresting installation that occupies the first floor galleries—common materials line the space, transforming hard and rigid structures into poetic forms. In one of the main installations, a long and low white plinth, nearly hovering, covers a large expanse of the gallery floors, on top of which a series of glass sculptures are placed—fragments of what were once windows, folded, crumpled, and torn like sheets of paper. Other works more tacitly punctuate the space; a shallow marble shelf along the side of a temporary wall structure (or room divider), or a series of light pink-beige wall pieces, like stone tablets, embedded with visible circuits from the surface of SIM cards. The information is pictured, but not available.

I will resist the personal read, the one that Córdova’s work begs of us. I will avoid the anecdotal, and instead resort to broader themes and a network of artists working in similar vein: all of who are based in, or in some regard have been produced, by the city of Chicago itself. And so in a sense, Córdova comes home to Chicago, a city she had not been to before the planning of this exhibition, embedded as just one individual in a public that possibly knows her well, even in its first encounter. We can understand her practice through these many rooms and many voices, articulating a school of sculpture that is at once sparse in form yet generous.

We start with Chicago-based artist Lesley Jackson, whose exhibition Walking with Rilke opened in early April of 2017 at Fourth Ward Project Space on the south side of the city in Hyde Park. Jackson and Córdova’s correlation lies in the delicate arranging of matter that aims to provide a viewer with threadbare language from which to construct a narrative. Jackson similarly leans on the titling of her work to reveal the temporal qualities that cast the objects into time-based practices, such as: Right Before the Sun Sets (2017). A nimble metal framework stands upright, displaying a series of objects, both found and produced by the artist, such a leaf with the work’s title printed delicately, or a yellow Plexiglas disc that acts as the sun hovering over a dangling key. In both cases, the titles instill purpose into the objects, making them the protagonists in an undisclosed story line. But unlike Córdova, Jackson removes the romance of a singular gesture, providing her viewer instead with a code, which is navigated through a series of objects held in proximity, as a custom-fitted armature rather than a discrete object.

Córdova’s repeated use of borrowed things for her sculptures make them performative objects, withholding something from someone in perpetuity, whereas Jackson’s objects are found through a timebased process of walking and wandering. In a conversation with the artist, Jackson described her sculptural logic through its relationship to poetry, or spells. In both, language is pared down, specific, and carefully arranged with an intended goal—affect or curse, respectively. Similarly, Córdova recalls the work of another artist, formerly based in Chicago and now residing in Washington, D.C.—Benjamin Zellmer Bellas. Specifically, his sculpture a lifetime facing North East together [CHURCH PEW – sculpture] (2012), shown at SLOW Gallery in 2012. In this work, a church bench was uprooted and replaced in the gallery, carrying with it its history and sentiment, embedded in the worn wood grain. Bellas’ approach converges with Córdova through the role of poetry in his practice, often marrying his sculptures to illuminating texts that serve to reveal an unobscured context: Similar tactics for orienting the viewer are readily available in Córdova’s window works: They say it’s like a rock (2015) lists materials as “Glass from a window facing south and Nag Champa incense.”

With both artists, the objects that are produced within a given space are expected to live dual-lives: one as an art object in the space of a gallery, and the other as a meticulously kept memory through the preservation of its position in space and time as detailed in titles.

Finally, Córdova’s “homecoming” lands on the work of Chicago-based artist Ben Regozin, whose sculptures, paintings, found photographs, and installations are perhaps most similar in method but divergent in style. Sparse and not overworked, but similarly charged with a vague and subjective emotion, Regozin’s sculptures exhibit much more handiwork and texture than Córdova’s graceful glass objects or studio-produced photographs that accompany her sculptures. Regozin’s sculptures, such as Wobbly Band (2014) or Sleeping Fox (2010), are pared down to essential forms, but operate as snapshots of specific moments of time and loaded symbols: the first an enlarged and distorted wedding ring, and the second the product of the artist’s thinking on exile, and foxes’ tendencies to forcefully eject their young out of the nest at a certain age.

More expanded theories on why a context like Chicago produces this vein of work, and how a Mexico City-based artist could so easily be inserted into a grander narrative, presses on the borders of a collective consciousness, whose exacting formula will have to wait for a future essay. And although Córdova’s work adheres to the currency of contemporaneity in its form and gesture, the connections are not merely threadbare: each of these artists have pushed against the limitation of essentials, traversing the threshold of how sparse an object can be, while still providing a generous experience for the viewer.

Placing Córdova’s work in conversation with Jackson, Bellas, and Regozin is somewhat anecdotal in its own right; Chicago and Mexico City have long been in conversation. The parallels between these artists are not simply an experience of locality—a romanticization of site that turns its eye from globalization—but rather, Córdova’s work welcomes the translation of the singular into plural. It is a correspondence heightened, not absorbed, by its aesthetically and conceptually similar counterparts.