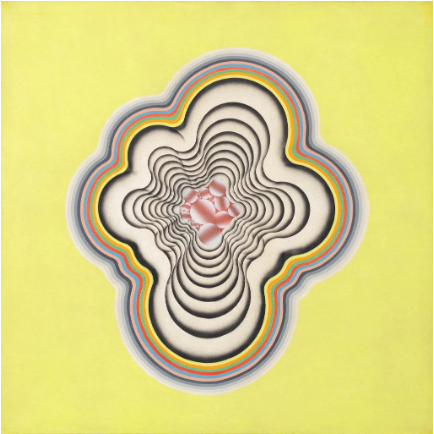 We are playing historical catch-up at the moment, driven partly by the art market’s incessant quest for fresh products, but also by a widespread desire to create a more global narrative of art in the 20th century. A good candidate for this is Kim Tschang-Yeul, a Korean-born artist who, along with Park Seo Bo and Lee Ufan, helped introduce Western modernism to Korea and whose terrific paintings from the 1960s and ’70s are currently on view in the exhibition “New York to Paris” at Tina Kim.

Mr. Kim studied art in South Korea and was part of the Korean Informel, a movement that originated in France and favored vigorous, expressive abstraction. Living in Paris and New York, however, Mr. Kim produced work that evolved into what you see here: a radiant, abstract brand of Pop Art, with concentric forms rendered in an unusual mix of acrylic and cellulose lacquer on burlap or canvas. Some of the paintings, like the “Composition” series from 1969 and 1970, have centers that look almost photo-realistic. This propensity was pushed even further in canvases from the mid-70s and one here, from 1980, which have naturalistic droplets of water painted against a monochromatic ground that look so real they might seep off the canvas.

My favorites are the “Compositions,” though, which look like psychedelic vortexes rimmed with neon or spectral rainbows. They feel very contemporary, partly because we’re in a moment of historical remix and revival that benefits lesser-known strains of art history: Mr. Kim’s work looks as if it were painted today, rather than 40 years ago.