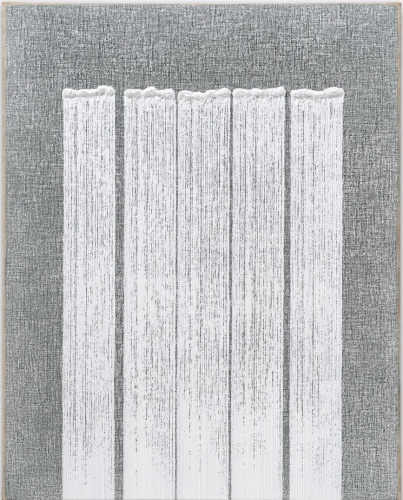 The artist, 85, is best known for his efforts to redefine the role of painting, bridging the gap between the avant-garde in the East and West.

Born in Sancheong, South Gyeongsang Province, in 1935, Ha graduated from the department of painting at Hongik University, where he later served as a dean. He was also the director of the Seoul Museum of Art from 2001 to 2006.

Ha began his "Conjunction" paintings in the early 1970s, opposing the traditional way of painting on canvas.

In pursuit of finding a Korean form of abstract art, Ha invented his unique back-pressure method, also known as "baeapbeop."

Ha applies thick oil paint to the back of the hemp canvas and pushes it through the coarse weave, creating beads of paint on the front. The result is not always as expected, but Ha embraces the outcome resulting from his loss of control as part of his painting.

Ha's practice is also closely related to Korea's turbulent modern history. Early on, he used burlap sacks that once contained post-war relief goods, instead of canvas. His use of utensils such as a palette knife and wooden spatula to push the paint showcases his repetitive labor to create artwork.

"These were highly charged materials that testified to what it meant to live under pressure, to survive, or simply to get by," the gallery said. "Ha's bold destructive gestures were a statement of independence, of individuality, and of objective and universal truths."

Though he has been working on the "Conjunction" series for about 50 years, Ha continues to experiment and evolve, spending time in his studio daily.

This is Ha's third solo exhibition with the gallery, which is operated by the granddaughter-in-law of Pablo Picasso. The gallery aims to bring the dansaekhwa movement to the forefront of the current global narrative of contemporary art.

"The works featured in the exhibition display Ha's transition to a variety of striking hues along his career, allowing his fundamental processes to work in new ways," the gallery said.

The London exhibit runs through Nov. 14.