Korean artist Kwon Young-woo (1923-2013) spent his entire career pursuing the essence of Oriental painting, but not in the traditional ink-and-wash method. Instead, he devoted his life to exploring the unique properties of paper, especially "hanji" (Korean paper).

These early works do not have colors like his well-known pieces from the 1980s, representing the artist's experimentation with formativeness and rhythm rather than color. Layers of hanji pasted on canvas create various shades of the achromatic color. Although all paper used is white, rough surfaces created by holes and lacerated patterns, different numbers of layers and discoloration caused by time give different depth and color to each piece.

Kwon was in the first class to study Oriental Painting at the prestigious Seoul National University in 1946, but he has defied conventional approaches to Oriental painting since then. He lived in Paris from 1978 to 1989 where his pursuit of paper bloomed. Despite the Western influence, Kwon's works have Zen-like qualities, completely different from strongly contrasted Western oil paintings. 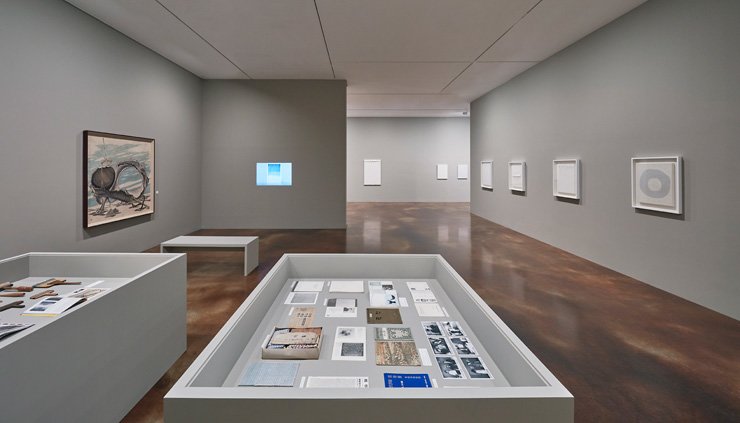 To complement the understandings of the artist, the exhibit spared a section for archives. The most noticeable in the corner is an Oriental painting portraying a conch shell in a surrealistic way. The 1958 painting "Seaside Fantasy" has won the Artist Award from the Minister of Education and Culture at the National Art Exhibition for blazing a trail in abstract painting in Oriental style. The same conch shell that inspired the painting is also on view.

A leaflet for his first-ever solo exhibition at the Shinsegae Gallery in 1966 and photos from the opening of the exhibit give a glimpse of the artist's pioneering character. Also on display are the tools Kwon used to make his art ― wooden spikes used for piercing holes in the paper and uniquely shaped brushes ― helping the viewers to visualize the artist's work procedures.

Kwon's correspondence with family and friends reveals the artist's quiet yet devoted-to-art character. He used hanji as a main material for his works even when he was in Paris and asked around for people who could carry the Korean paper to the foreign city.