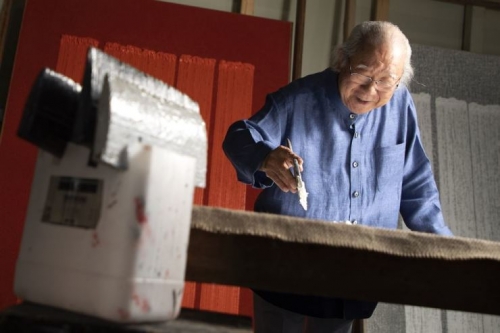 Throughout his career, artist Ha Chong-hyun, 84, has been searching for an answer to a burning question: What are the fundamental elements of a painting?

He has explored various challenges and experiments in his well-known "Conjunction" series, which redefines the notion of conventional wisdom of painting by tackling the canvas from behind, in order to answer the question.

"When people think of painting, whether they are from the East or the West, they immediately relate it to filling up the blank space on canvas or paper. However, I wanted to escape these basics," Ha said during a recent interview with The Korea Times at his studio and showroom in Ilsan, northwest of Seoul.

Born in the mountainous Sancheon, South Gyeongsang Province in 1935, Ha graduated from the department of painting at Hongik University, one of the top art schools in Korea and later served there as a dean.

In the 1960s, Ha explored abstract art in the improvisational Art Informel style and led the art movement through the Korean Avant-Garde Society, a pioneering collective of artists who first embraced abstract art in Korea. In the mid-'70s, Ha delved into materiality in fine art using plaster, lumber and newspaper.

"Back then, I was at the forefront of the contemporary art world. I tried to destroy the existing order, including the concept of painting on a canvas," Ha said. "I wanted to find a Korean form of abstract art ― not the European or Japanese style."

Ha employs a variety of materials that reflect the era he lives in.

"After the Korean War, most Koreans suffered from a shortage of commodities. I had to look for the residue of the war to find materials for my work," Ha explained. "I was always interested in novelty and materials that change with the times. Barbed-wire was a familiar material for me as I lived through the postwar years and I placed the wire on the canvas."

The artist has ambivalent feelings toward barbed-wire. "It has a certain charm, but at the same time, it suppressed people during the war. Postwar life was the subject of my work, but expressed in an abstract way," he said.