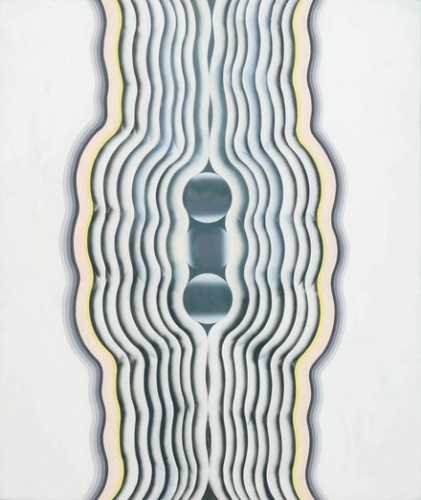 The Korean painter Kim Tschang-Yeul is part of a generation that traveled outside East Asia in the 1960s and ’70s in order to develop a more universal approach to painting. In those decades, South Korea existed under a military dictatorship that offered its citizens—and specifically its artists—very little exposure to what was happening culturally in the Western world. There were, however, some artists who were interested in radical work, despite government repression and a lack of public interest. Kim was one such artist, as were his colleagues during this period, including Ha Chong-Hyun, Park Seo-Bo, and Lee Ufan—all figures who would eventually become linked to the Dansaekhwa ( Monochrome) movement of the 1970s. In general, however, conditions for Korean artists in the aftermath of the Korean War (1951-53) were not good, and even those most committed to avant-garde culture often moved abroad, where it was easier to participate in the global art world.

In most cases, the artists who traveled outside Korea would eventually return as political and economic conditions—and, hence, the quality of life—slowly improved. Two notable exceptions would be Kim Tschang-Yeul and Lee Ufan, who made the conscious decision to work primarily in Paris with outposts in either New York or, in the case of Lee Ufan, Tokyo. Michelle Yun has argued that for Kim, who maintains a traditional Korean perspective, life in post-war Paris was preferable to the bustling lifestyle associated with New York. In addition, the overwhelming visibility of Pop Art and Minimalist sculpture impeded Kim’s pursuit of his own idiosyncratic style. He was most attracted to paintings related to a late Art Informel approach—we see the fruits of this interest in the front room of Tina Kim Gallery. These works by Kim Tschang-Yeul show clearly that he was pursuing a direction of his own despite the trends that surfaced around him. This was not easily done in the atmosphere of the New York art world of the late 1960s.