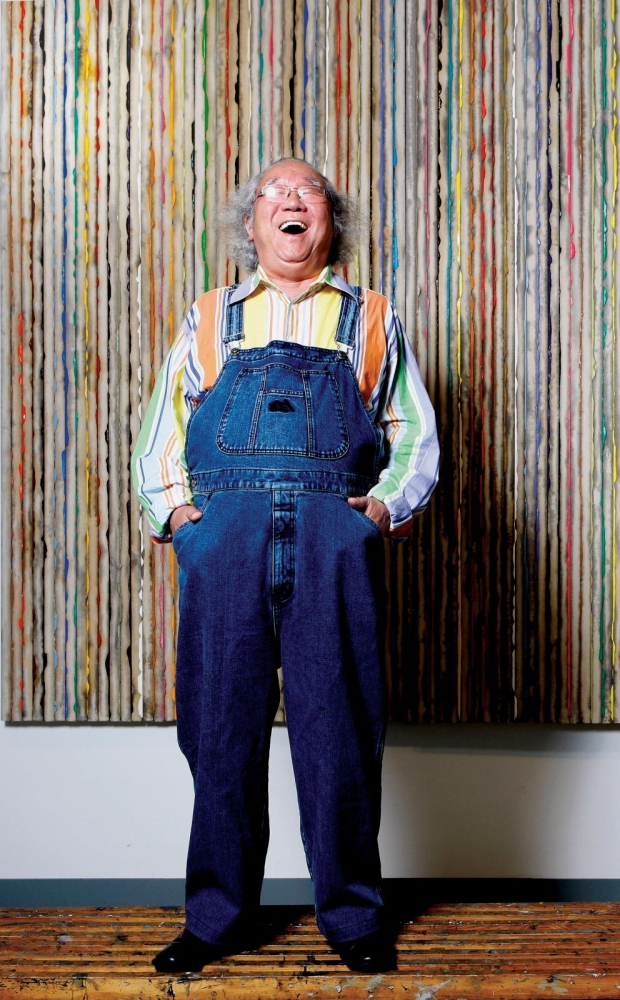 Among the now internationally acclaimed Dansaekhwa artists, Ha Chong-Hyun (b. South Korea, 1935) is notable for his undeniable influence on the shifting landscape of Korean art in the 1960s and ‘70s. A part of the first wave of artists to embrace abstraction in South Korea, he also cofounded A.G., a pioneering avant-garde collective that gave rise to a new oppositional art. Ha’s engagement with abstraction developed in tandem with Japanese Mono-ha, Arte Povera, and post-Minimalism, resulting in an aesthetic which focused on everyday objects, with an emphasis on their materiality. The artist rejected figuration and, strongly influenced by the social urgencies of a country entering a period of military dictatorship, responded to the unique political situation of South Korea with his material and colour selection.

Dansaekhwa, also known as the Korean monochromatic movement, is characterised by variable techniques and philosophies, but broadly defines a type of experimental painting that broke away from Korean art traditions while responding to European and American abstraction. Within the range of diverse approaches categorised as Dansaekhwa, Ha has created his own recognisable style. He is best known for his use of bae-ap-bub, which translates literally to ‘back-pressure method’ and involves placing colour on hemp-woven canvas from its verso. The irregular, loose structure of hemp allows him to press oil paints from the back before scraping broad sections to create swathes of movement on its surface. Ha’s work speaks to the era in which he first began his practice. Graduating from Hongik University in Seoul in 1959, he incorporated the elements that were abundant in an economically and socially unstable conflict-torn country. Burlap sacks, of the kind used to transport goods by American soldiers during the Korean War, became a natural choice, in addition to barbed wire and metal coils.

Ha soon established a connection with the international art scene, participating in the 1961 Paris Biennale and the São Paulo Art Biennale in 1967. Gaining fame within Korea, he became dean of Hongik University’s Fine Arts College (1990– 1994) and later the director of the Seoul Museum of Art (2001–2006). But it wasn’t until the recent meteoric rise of interest in Dansaekhwa that he gained notable global recognition. Art historian Joan Kee’s 2013 publication Contemporary Korean Art: Tansaekhwa and the Urgency of Method, the first in-depth survey of the movement, is credited with sparking international interest. Less than a year later, Ha was included in major exhibitions on Dansaekhwa at Kukje Gallery in Seoul and Blum & Poe in Los Angeles (Kee curated the latter). His importance was further acknowledged in solo exhibitions at Tina Kim Gallery and Blum & Poe in New York, and he participated in a group show of Dansaekhwa artists at the Palazzo Contarini-Polignac during the 2015 Venice Biennale. Paris’ Centre Pompidou, the Solomon R Guggenheim Museum and the Museum of Modern Art in (both in New York) have each organised exhibitions dedicated to Dansaekhwa.

Most recently, the artist, now 82 years old, is currently the subject of a new solo exhibition at Almine Rech Gallery in Lon- don, on view through 29 July 2017. The show features a selection of works from ‘Conjunction’ (1974–ongoing), a series that represents the evolution of the artist’s sombre yet playful style. The paintings are an exploration of Ha’s philosophy of material matter, and began as a way to transform physical labour into abstract composition. While his earlier work includ- ed installations made with newspapers, rope and other common objects, his training in painting led him to search for a method that could bridge sculptural forms with flat surfaces. Ha spoke with Ocula about the ‘Conjunction’ series, how his work responded to the modern history of Seoul and the continuing transformation of his technique.