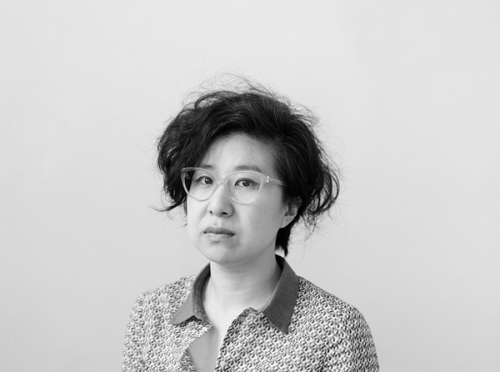 In June 2018, Suki Seokyeong Kang was awarded the Baloise Art Prize at Art Basel, alongside Lawrence Abu Hamdan: an annual award given to two emerging artists exhibited in the fair's Statements sector. Showing with One and J. Gallery, Kang presented an installation of abstract sculptures including GRANDMOTHER TOWER–tow #18-02 (2018), composed of painted steel tubes forming three drum shapes with a triangle 'face', each perched on top of the other. GRANDMOTHER TOWER–tow #18-02 stems from the ongoing series 'Grandmother Tower'. The first Grandmother Tower (2010) comprises a stack of discarded dish racks wrapped in thread to create enough friction to produce a curved, freestanding stack assembled to mimic Kang's grandmother's posture and height. These sculptures honour a woman who was born in the 1920s, and lived through colonisation and the Korean War. As Kang explains, her grandmother always responded to questions about her life with answers that were 'oriented towards the future', and she encouraged Kang to 'focus on how to cope with the present in which [she] belong[s].'

The idea of systematising roles, bodies, temporalities, and gazes through the arrangement of elements within a given space is a thread that runs through Kang's practice, right down to the use of titles, which follows a calculated system of sorting. ('Each object has its own name, such as Heavy Round, and Warm Round', Kang notes; 'and when the units are combined, the works can be renewed with titles such as Round Cliff and Poking Square.') The grid is a guiding and organisational principle—something that is evident in Black Mat Oriole, a five-year research project (2011–2016) presented at the Gwangju Biennale in 2016, which explores the power and politics of space.

Black Mat Oriole had its US premiere in 2018 at the Institute of Contemporary Art in Philadelphia (27 April–12 August 2018). The show included sculptural assemblages made from a variety of materials, including urethane-painted steel and polished wood, and a video in which these constructions are presented in a black box, with near-invisible bodies moving through, around, and with them—a three-dimensional visualisation of a composed picture plane. The exhibition launched with a special 'activation' performance by two choreographers on works inspired by the hwamunseok, a traditional handwoven mat whose cultural legacy stems from the Goryeo period, when the chunaengmu dance was performed on it. (About two metres long and wide, the hwamunseok serves as the physical boundary restricting the movements of the dancer—a restriction that Kang plays with when deciding on the specific measurements of her own mats.) Part of Black Mat Oriole is about honouring a dying craft, since hwamunseok are now mass-produced rather than hand-woven. To create the woven elements of her installations, Kang works with three female artisans traditionally trained to make these mats.

In this conversation, Kang reflects on the core ideas behind her projects, and discusses her installations at the 12th Gwangju Biennale: Imagined Borders (7 September–11 November 2018) and the 10th Liverpool Biennial, Beautiful world, where are you? (14 July–28 October 2018)...