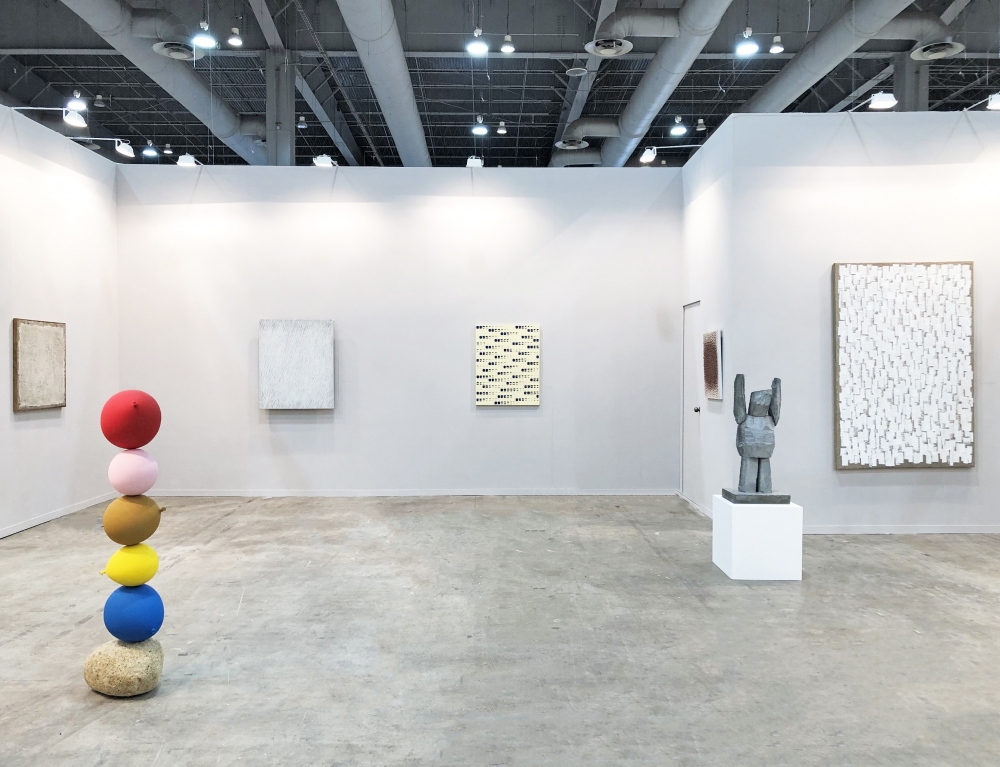 For all the utopian connotations that come with evident craft and populist aesthetics—a celebration of labor, accessible materials and processes, the warm “aura” of the human hand—there’s room for dystopian critique as well. New York’s Tina Kim Gallery, for example, has a tidy booth of artists from South Korea’s resurgently popular Dansaekhwa movement. The loosely-defined style arose in the 1970s, when disenchanted academics developed an austere style as a subtle protest of South Korea’s authoritarian rule. Rejecting the somewhat conflicting images of “modernity” and nationalism the military government sought to promote, the artists of Dansaekhwa (literally “monochrome painting”) embraced repetitive processes and materials associated with poverty in solidarity with Korea’s oppressed working class.

Ha Chong-Hyun, for example, produced “paintings” by stretching burlap and pushing paint through the loose weave from the back of the fabric. The resulting compositions are hauntingly sparse, speaking to craft without displaying traditional brushstrokes we associate with beauty. Now in his 80s, the artist continues to work in his signature style, and he and his peers have found a booming international market for their eerie works after decades of relative obscurity.

Suki Seokyeong Kang, another Korean artist in Tina Kim Gallery’s booth, has a less angsty, but perhaps more ambiguous take on artist/artisan labor. She has tracked down one of the last craftsmen who make super-specific bamboo mats used in traditional Korean rituals. The process of producing the mats, involving a unique dying and weaving processes, is an almost dead art form. Here, she’s collaborated with a mat maker and framed their products behind intricate metal screens based on Korean musical compositions.