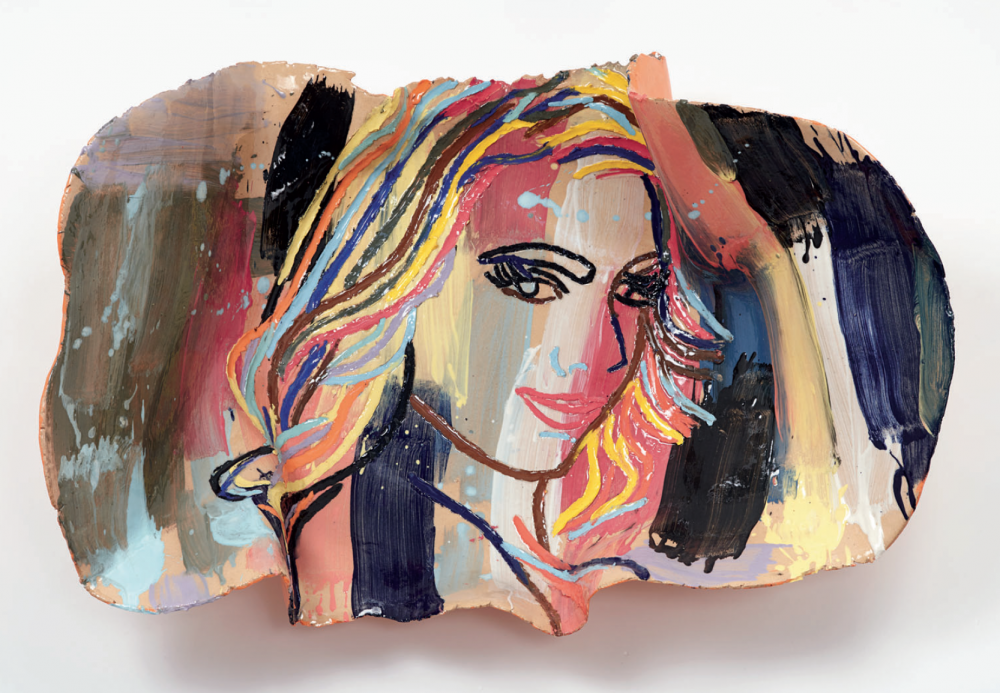 Widely known for her embroidered paintings exploring beauty and gender, Ghada Amer has a new love: ceramics. Her newfound passion unexpectedly began with a commission by the Mathaf: Arab Museum of Modern Art in Doha to create something new—something that she had never explored—for its inaugural exhibition, Told/Untold/Retold, in 2010. Set on creating sculpture from solid materials without any idea of how to do it, Amer started working with fabricators to make prototypes for three-dimensional pieces.

After some costly missteps, she discovered that a key part of the process of casting a metal sculpture was to make a clay model that could be used to make a rubber mould. Realising that she could save money if she made the model herself, Amer decided to learn how to work with clay and signed up for private classes at New York‘s Greenwich House Pottery, where its director, Adam Welch, took her under his wing.

Having no interest in working on the wheel or making functional pots, Amer asked Welch to teach her what she needed to know in order to make a prototype for casting. Initially she found working with clay to be “dirty,” but before long she began to ﬁ nd pleasure in the hand-building process, calling it her “happy time.” She gave up on the idea of making prototypes and plunged whole heartedly into making painted plates, which she associated with Picasso and Matisse and her younger days in the South of France.

Working on loosely shaped slab forms, Amer began painting her pornographic women on the clay before ﬁring, but found the traditional process of applying grey glazes that revealed their colours in the kiln to be too difﬁcult. Wanting to paint and see the colours as she brushed them on, she learned how to mix special pigments with a porcelain slip and then inlay it to deﬁ ne her ﬁ gure on the clay. Now she was on her way.

Finding her experimentation fascinating, Welch created an artist-in-residency programme so that she could continue her playful investigations. Through trial and error—and with lots of breakage—the plates kept getting bigger, with Smoking Girl in Colour (2014) being a good example. Roughly oval in shape, it captures the face of a reclining femme fatale seductively gazing at the viewer with a cigarette in hand. Expressionistically painted with broad brushstrokes of colour behind the linear facial features, it conveyed the artist’s usual subject matter with more immediacy.

Expanding the scale, Amer discovered that pieces would collapse and warp in the kiln, which was troubling at ﬁrst but then became something that she would aim to achieve. She started twisting pieces into forms she called “knots”, which were inspired by Pop Art sculptor John Chamberlain’s crushed car pieces. Hiding (2014) looks like it might have been a painted plate that she didn’t think worked so she crumpled it into something else, while Portrait en Vert avec Tache Orange (2014), which is painted on both sides, may have caved in the kiln.

Since she wanted to paint both sides of the slabs and have them visible, she needed them to stand. Using a cardboard box as a template, she would work out the logistics of the piece and then make it in clay—painting it and propping it with stilts during the ﬁ ring. In La Géante (2017) the woman is reclining on one side and looking straight out at the viewer from the other side. The form is so uncanny that it’s only after observing it in the round you become aware that it’s based on a deconstructed box.

Experimenting more abstractly, Amer began making “scrap” pieces, like Yellow Lines (2015), with leftover bits of pinched clay and small twisted constructions, such as Thought #3 on a Lobster Base, which she displayed on a painted plinth.

After presenting some of these experimental pieces alongside her more acknowledged works in solos shows in Dubai, Berlin and New York, Amer ﬁnally got the chance to show them on their own at Dallas Contemporary in the fall of 2018. Showing 75 spirited pieces in the exhibition Ceramics, Knots, Thoughts, Scraps, she had turned a corner—a transformative feat that every mature artist must face in their career—and opened the door to a future brimming with new possibilities.