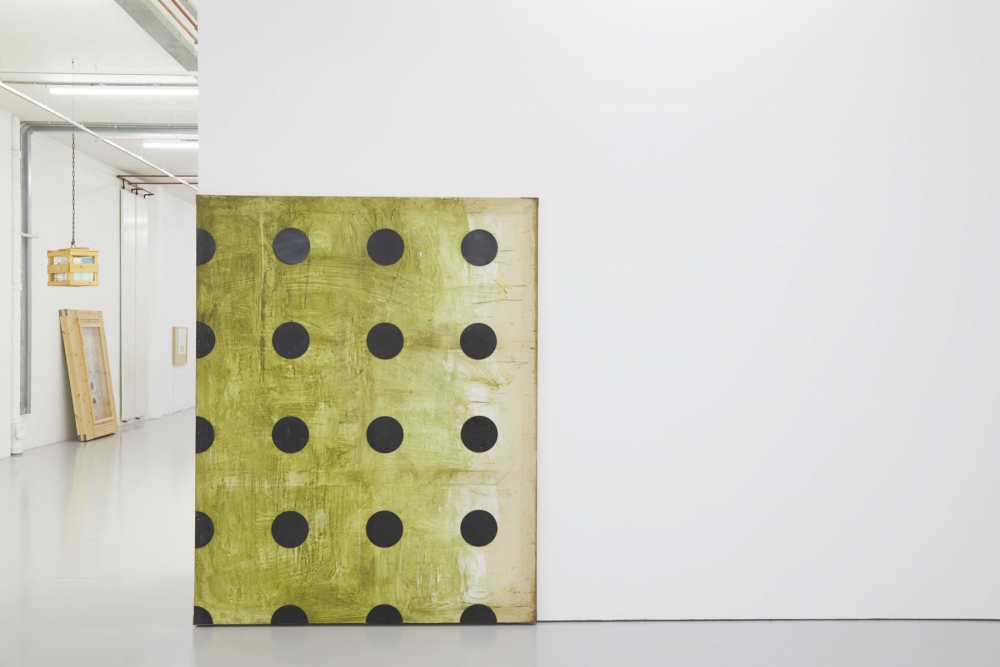 It is easy to look at Kim Yong-Ik’s best-known motif – the repeated polka dot, often on a plain background – and mistake him for a minimalist. As ‘I Believe My Works Are Still Valid’ makes clear, though, that is far from the case. Kim’s first European solo exhibitions, co-curated by Spike Island’s Helen Legg and the Korean Cultural Centre’s Je Yun Moon, show an artist who has spent his career avoiding easy labels and the advantageous affiliations that often accompany them to produce a body of work that is by turns meditative and humorous to the point of deliberate daftness.

The works on display at Spike Island form a survey of Kim’s career from the mid-1970s to the present, ranging from the draped canvases of ‘Plane Object’ (1978–79/2015), through to the quasi-valedictory works from more recent years, such as Aerial Burial (2015) and The Coffin of a Hermit ‘Despair Completed’ (1993–2014). Carefully selected by the curators in close collaboration with Kim, the works form an overview of an oeuvre that is wholly rich and unexpected. Taken together with the new site-specific installation at the Korean Cultural Centre (KCCUK) in London, the Spike Island show is a superb introduction to an artist few UK viewers will know.

The earliest pieces at Spike Island date from a turbulent period in Korea’s political history, following the assassination of President Park Chung-hee in 1979. Park – a former general and military strongman who had risen to the position of president via a coup in 1963 – was replaced quickly by General Chun Doo-hwan, who immediately imposed an expanded martial law. Chun’s administration clamped down on universities, political dissent and freedom of the press until the mass pro-democracy protests of 1987. Kim’s early work, while remaining in certain ways apolitical, bears the traces of the turbulence in its own muted way. His most open political gesture, instead, comes in the form of the three cardboard boxes that comprise 1981’s Untitled (Dedicated to the Exhibition ‘Young Artists’ in 1981) (recreated 2011). The boxes were originally shipping crates for more ‘Plane Object’ canvases; seeing them waiting to be unpacked, Kim instead decided to leave them as they were, in protest at the regime’s censorship policies.

Elsewhere, there is the sense, reinforced by the artist’s own statements and the curators’ notes, that Kim conceived of both open protest and retreat into the closed world of Korean modernism as ways of letting politics have too much say over his practice or over his personality. As he writes on Closer … Come Closer (1996–2013) – a white canvas sparsely punctuated by blue squares and rectangles, wrapped in transparent protective plastic – ‘I am never an aggressive type, as all avant-garde has been’. Though his use of polka dots and colour plains makes clear his kinship with dansaekhwa (monochrome) painters including his teacher Park Seo-Bo, or Lee Ufan, he refused both their occasionally steely aestheticism and the overtly political agenda of the minjung (people’s) painters.