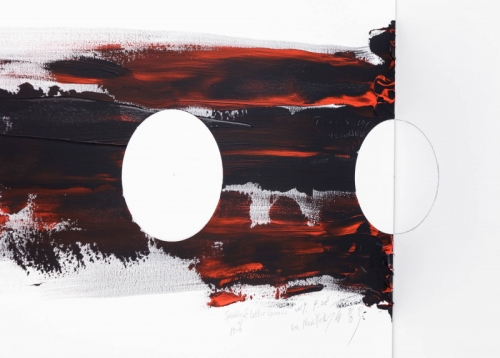 Kim Yong-Ik never fails to surprise his audience. In his second solo exhibition, “Speaking of Latter Genesis,” 2019, at Tina Kim Gallery, Kim’s signature polka dots are unexpectedly pristine and unsullied. For Kim the dots are a part of his lifelong subversion of art making—often appearing smeared, soiled, and scribbled upon in his earlier work—in keeping with his anti-art aesthetic. A nonconformist from the get go, Kim’s art developed in defiance of the minimalist Dansaekhwa movement of the 70s and later the left leaning Minjung or “people’s art,” of the 80s in South Korea.

Kim’s iconic dots first materialized in the 90s as non-painterly rubber circles fixed to the canvas, and later progressed into what he termed as “meaningless grids.” Large dots made in geometric formats that resemble the repetitive nature of monochrome Dansaekhwa paintings are in fact representative of Kim’s belief that anyone can make art. His effort to upend the hallowed institutions of the art world and democratize art making came with hand written notes on the back of his works and his practice of continually adding layers to his paintings that questioned whether a work of art is ever complete. This idea of incompletion is furthered in his site specific installation in New York. Here black and red dots presented in adjacent rooms appear to be one continuous work. Occupying two large rooms in the spacious storefront gallery, precise graphite circles drawn in a horizontal line directly on the wall slide seamlessly onto accompanying white canvases. There they might be painted in half moons on some canvases or full circles as a part of a grid on others. Painted red and black circles also appear at random on the walls alongside empty canvases. In the second room, a large unpainted primed canvass hangs high in a corner just below the ceiling, while a second one is placed diagonally across the room on the floor.