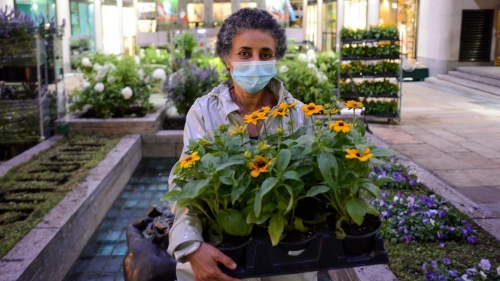 Ghada Amer standing in front of her work 'Women's Qualities' (2020) at Rockefeller Centre.

In Ghada Amer’s paintings, threads behave like coloured rivers, abstraction obscures figuration and unknown women proliferate. However, for the first time, familiar faces are appearing in Amer’s work. Although the Egyptian artist, who lives and works in New York, calls the female figures she sources from popular culture – often men’s magazines – her “friends”, she has been looking to her own environment for her latest series.

Her assistant, a cousin, a fellow yoga student, and her sister, are all featured in a series called Women I Know. “I drew the faces based on photos I took and then found the right sentence with which to compose each portrait,” Amer says. “Although I began this work in 2014, I was diagnosed with breast cancer just before the pandemic hit. I was home for a year and I had the strength to focus. I could think about how to continue the series,” she explains.

“In the past, women were only allowed to do portraits. They couldn’t paint the church, wars or any of the important stuff,” she says. This is a familiar refrain, and Amer has consistently incorporated embroidery and feminised expression in her work as a critique of male-dominated genres in art history, where painting reigns supreme.