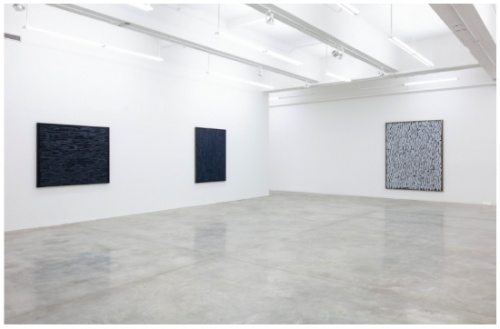 It is not uncommon among contemporary Korean artists to find the same title used repeatedly for different paintings, often over a period of several years. Although one might find a number sequence to differentiate one painting from the next, for the most part the repetition of the title is perennial.

This practice began with artists in the early 1970s associated with Dansaekhwa (monochrome). While Park Seo-Bo, Lee Ufan, Yun Hyung-Keun, and Ha Chong-Hyun never conceived themselves as a collective, each of them focused on the use of a single word-sign in their work that served as a kind of thematic structure. In Ha’s case, Conjunction was the signifier of choice. For the western viewer this might suggest a conceptual underpinning to the artist’s work, but, even if true, the idea of conceptually underpinning work has a Korean precedent that has nothing to do with Conceptual Art.

For those familiar with East Asian brush painting, the abstract (empty) mind always plays a formative role in relation to the brush and ink. Space exists primarily as an idea sublimated at the service of both. In this context, there is no such thing as material divorced from idea. Instead, they are inextricably bound together–in contrast, for example, to western Color Field painting where the formalist dictum determines more or less what happens on the surface. In the latter case, any idea beyond the visual construct is taken (for the most part) as a literary adjunct and therefore exists outside the concerns of what a painting should be or will become.  Among the Dansaekhwa painters, things are different...