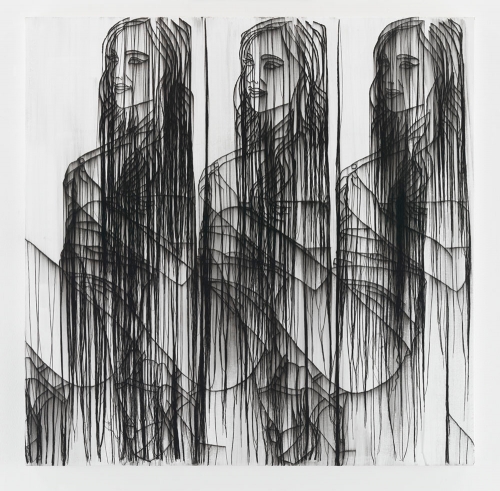 Over the last twenty-five years, Ghada Amer has developed a body of work centered on installations and embroidered paintings exploring women’s self-determination and sexual independence. Born in Egypt in 1963, Amer earned an MFA in painting at the Villa Arson in Nice, France, in 1989 and moved to New York in 1996. In light of the #MeToo movement, her relevance has perhaps never been greater—or her approach more controversial. The current career-spanning show at the Centre de Création Contemporaine Olivier Debré speaks not only to Amer’s championing of female autonomy but also to debates over personal strategies of empowerment. Does her consistent focus on attractive young women glorying in their own bodies triumphantly transcend male fantasies or merely reinforce them?

“The sexual life of adult women is a ‘dark continent’ for psychology,” Freud alleged in The Question of Lay Analysis. Curator Élodie Stroecken adopted “Dark Continent” as the title for the exhibition, evoking the psychological depths of Freud’s women, the interiority of female sexual organs, and Western notions concerning Amer’s home continent. Displayed in an all-black gallery, the paintings on view offer a broad optical spectrum—from figurative to abstract, from monochrome to multicolor, from grid-based to fervently “gestural.” The last term is metaphoric, since the artist consistently glues fabric threads to her canvases to mimic long drips and swirling lines of paint. A separate sun-drenched gallery houses a remake of a 1998 “cactus painting”: a floor installation comprising tiny phallic cacti precisely arranged in concentric rectangular patterns reminiscent of the abstract paintings of Josef Albers and Frank Stella. Ouch.

The newest formal elements on view are tabletop metal sculptures that resemble crumpled aluminum foil but are actually made of brass plated with silver. These works are a startling departure—cutesy representations of flowers, stones, floppy-eared rabbits, and Mickey Mouse. One can only hope that there is some Koons-like irony, some joke on the association of girlishness and glitter, in these twee objects (prototypes for full-size sculptures) and their jarring juxtaposition with Amer’s more staunchly feminist paintings.

Perhaps the key lies in recent paintings like the squiggly monochrome Ladies in White-RFGA (2018), whose female figures are fragmented and diffused into near invisibility. Amer’s threads often recall not only long hair and running tears but also a kind of shredded veil, disclosing what the prudish and authoritarian seek to hide. Here, the black veil advocated by conservative sects of Islam has seemingly reemerged as its own contrary.

After all, the black veil is, like the whiteness of Melville’s whale, a self-contradictory sign. While its purpose is to obliterate sensuality and exercise social control, it also suggests that there lies beneath that dark fabric a sexuality so potent that its public disclosure would disrupt individual lives and society as a whole. Amer clearly acknowledges the continuing reality of female repression, while rejoicing in the ever-growing possibilities of liberation.