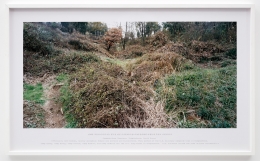 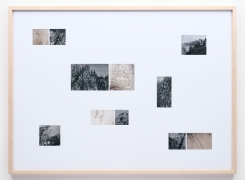 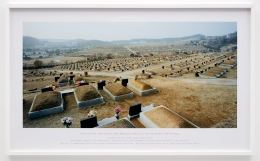 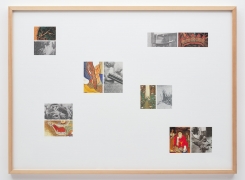 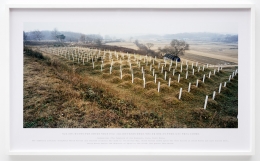 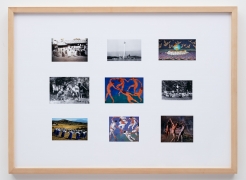 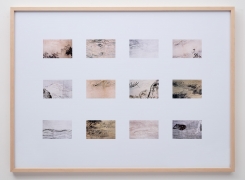 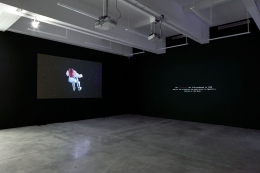 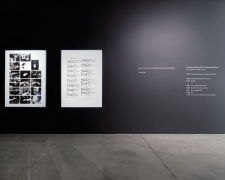 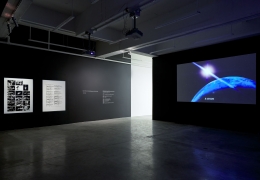 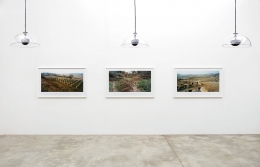 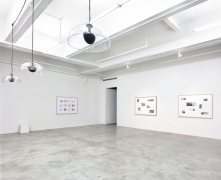 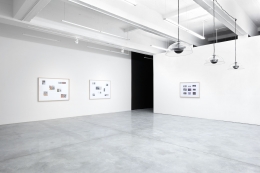 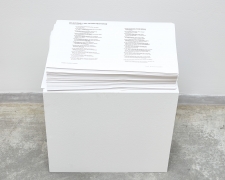 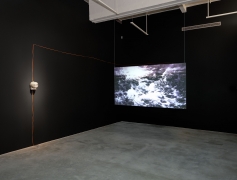 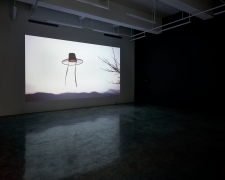 Tina Kim Gallery is pleased to present the first solo show of Park Chan-kyong (b. Seoul, 1965) in the U.S on view at the gallery’s Chelsea space from May 5, 2016 – June 11, 2016. In addition to his conceptual exploration of photography, film, and text, Park is known for his research-based, philosophical investigation of South Korea’s sociopolitical history. In Park’s practice, the question of history is addressed not only as a political subject matter but also as a deep-seated aesthetic dilemma, situating the artist firmly on par with his contemporaries, in Korea and elsewhere, invested in the visual arts’ relationship with politics of fiction, disjunctive temporalities, and postcolonial imaginations. Showcasing selective works from the past decade, the exhibition promises a breathtaking glimpse into his multi-media installations exploring Korea’s North-South relations in addition to photography, photomontages, and films on shamanic ritual and tradition.

Park is a key representative of the South Korean contemporary art scene and its nascent beginnings in the 1990s when it began to exert greater vitality and diversity (a moment defined by the end of military dictatorship and the institution of parliamentary democracy in 1987) and guaranteed a new level of artistic freedom and connection with the rest of the world. But Park’s contribution to the nation’s dynamic art scene is not restricted to that of an artist; it expands to the roles he played as a critic, a teacher, an organizer, and most recently, a curator. After graduating from Seoul National University with a BFA in painting, Park wrote criticism focusing on important artists like Min Jeongki, Choi Minhwa, and Choi Jeonghwa as a founding member of the Art Criticism Research Group (1989-1993). After studying photography, film, and critical theory with Allan Sekula and Thom Anderson at the California Institute of the Arts, he returned to Seoul in 1996 and soon afterwards co-founded Forum A, a monthly magazine that provided a much-needed discursive platform for South Korean art practitioners. In 1999 Park worked with his closest allies to establish Korea’s first artist-run alternative exhibition space Pool (still in operation as Art Space Pool). It was also around this time that Park held his homecoming, first solo exhibition Black Box: Memory of the Cold War Images, for which he utilized a slide projection to show his own photographs and found images. The work investigates how popular media such as television, fiction films, evidentiary photographs in journalism, and war museums all shape the memories and reality of a divided Korea—a place where the Cold War continues despite being in an allegedly post-Cold War era.

Park’s consideration of art as constituting public culture originates from a belief in art’s power to address reality and the beyond. Opening the current exhibition is Power Passage (2004-7), an award winning installation that includes a two-channel video, three images on panel, and a wall text (Park was awarded the prestigious Hermès Korea Misulsang in 2004 for the work). The video transports us to the historical year 1975, where one “passage” was made by docking two spaceships belonging respectively to the United States and the Soviet Union, in a symbolic union of the two rivals signaling the end of the space race. In the same year, another “passage”—a secret underground tunnel dug manually by North Koreans to send spies to the South—was discovered by the South Korean government near the De-Militarized Zone (DMZ), a 2.5 mile-wide and 160 mile-long border that simultaneously separates and connects the two Koreas. A composite of images, film footage, and facts painstakingly collected by Park from historical archives and Hollywood science fiction movies, Power Passage questions the two starkly different dramas of the Cold War—a spectacular denouement and a period of dirty backstabbing—where, in curator Doryun Chong’s words, “the space-age futurism embodied by a real-world event and cinematic fictions intermingle with the sentimentalism of reunification.”

Park is one of the few artists today whose fascination with North Korea and the division of the Korean peninsula has remained consistent. But his interest in the isolated regime is driven less by a blind exoticization than an epistemological and philosophical inquiry into world history that, for post-colonial nations like the two Koreas, is never a rational, linear progression but often manifests as lurid refractions of unprocessed emotions. The collective desire to restore a single Korean nation as expressed in the term “re-unification,” for example, is as nostalgic as it is phantasmagoric. The remnant of the Cold War as a unresolved tragedy is conveyed in Park’s short film Flying (2005), which reworks the 2000 documentary footage of the Seoul-Pyongyang flight carrying then South Korean president Kim Dae Jung to a joint summit with then North Korean leader Kim Jong Il. Park casts the retrospective eye of a former romanticist onto what is by now considered the zenith of inter-Korean reconciliation, by adding slow- motion effects and the angst-ridden, ominous soundtrack Double Concerto (1977)—that, as the film later reveals, was composed by the Korean-born Yun Isang. Yun lived in political exile in West Germany, because of the South Korean government’s policy of red-baiting, before passing away in a Unified Germany. An abundance of emotion similarly informs the work Black Out (2009), a video showing a series of colossal ink paintings, themselves depicting dramatic spectacles of violent ocean waves— considered the epitome of North Korean revolutionary art. These images of North Korean “revolutionary romanticism” are projected intermittently along with texts that detail the jarring disparity between the regime’s tight grip on the aesthetics of power and the reality of its dire energy needs: the country lacks sufficient electricity, South Korea refuses to supply energy, and Swedish-British corporations are exploring oil and gas reservoirs in the North Korean sea.

Park has more recently investigated the theme of “tradition” as a neglected element repressed during the hyper modernization of South Korea—especially the traditional indigenous beliefs of shamanism. This interest began with Sindoan (2009), a documentary film on the history of non-conventional religious practices that flourished around the Mountain of Gyeryong in South Chungcheong Province. Death, too, has become a subject of Park’s reflection. The photo and sound installation Three Cemeteries (2009) features three collective burial sites near the DMZ reserved for people long neglected by history: North Korean-born unrepatriated citizens, (mostly) anonymous sex workers who worked near a U.S. military base, and the nameless North Korean and Chinese soldiers who died during the Korean War. If histories are written by excising the most bizarre, untimely, and uncanny subjects, summoning these displaced ghostly spirits is a task reserved for an artist as a modern-day shaman. This can be seen in the short fictional film about an unjustly killed man summoned by a shaman, Night Fishing (2011), that bends our perspective and the film’s temporality in an unexpected, ghostly way. In addition to staging a spectacular shamanic ritual, Park borrows cinematic tropes of horror films and creates what he calls an “Asian gothic,” where the realm of ghosts and that of humans are intertwined. Park continues this exploration of shamanism in his most recent feature Manshin: Ten Thousand Spirits, a biopic of the fascinating life of Kim Keum-wha, one of Korea’s greatest shamans. In linking documentary footage with reenacted scenes, the film continues Park’s signature merging of historical facts with fictional perspectives, thereby successfully bringing back a moment from the past by re-living and re-mediating it. Curated by Park in 2014, the biennially held exhibition SeMA Media City Seoul was titled “Ghosts, Spies, Grandmothers,” referring to the three types of mediating bodies of history that challenge our perception of artistic “medium” and “media art.”

Ghosts, as recently noted by Park, are like Walter Benjamin’s idea of an angel of history, caught between the past and the future. As Park observes, traditions in a postcolonial region loom large not because of their original romance but because of the way they illustrate the abrupt ruptures that have occurred because of colonial modernization. Park’s goal is to bring back elements of these (forgotten) traditions in order to remember the violence of that history. The artist’s recent photomontages—Mountain God (2008), Dance (2008), Diamond Mountain (2016), Flood (2016)—demonstrate another way of addressing “traditions” as more than simply a theme. In Park’s view an artistic subject matter functions quite differently, becoming “neither a criterion to judge a work of art nor a ‘net’ to filter it, but closer to a stain that is found on it. It is more akin to certain patterns that suddenly emerge in the mind of an audience at a certain point in time after having experienced the artworks.” Thus, these photomontages evoke in us a faint impression of a long lost tradition as it erupts into the present in a state of decontextualized, fragmented mutations, not unlike ghosts whose presence is obliquely felt in the body of the beholder or through the shaman. At the same time, a post-colonial subject surreptitiously confronting fragments of tradition would inevitably feel uneasiness, which Park calls “colonial unheimlich,” as if one had just encountered something strange, uncanny. Home is always “unhomely” for those who are making a homecoming. With this exhibition then, it remains to be seen how the politico-aesthetic complexity with which Park’s works operate will be experienced and mediated by his New York audiences, who are, allegedly, at “home.” 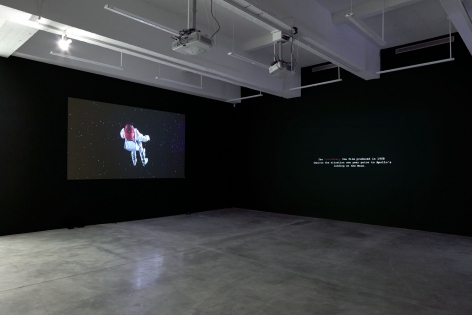 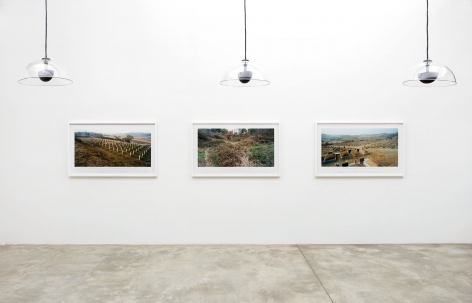 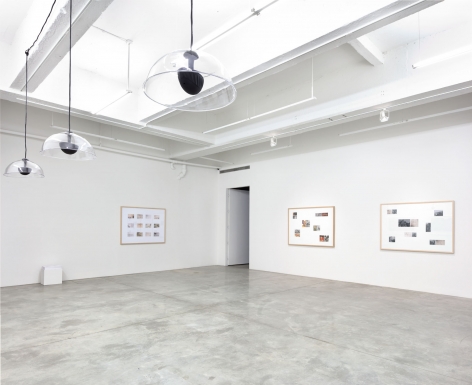 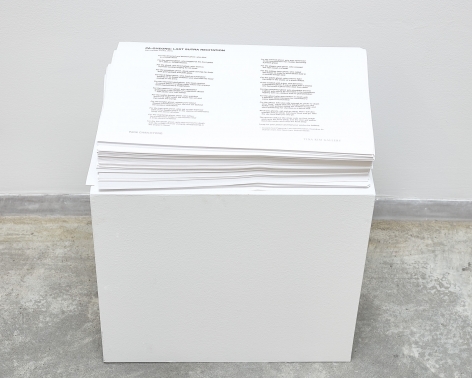 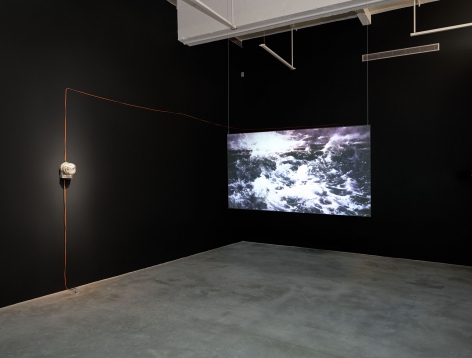 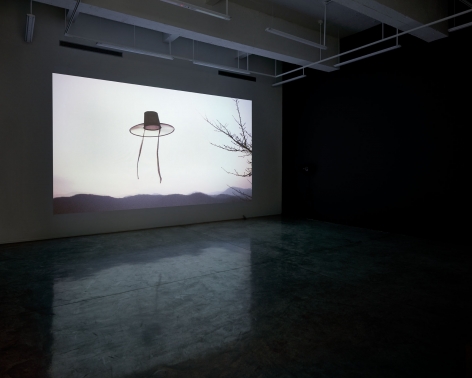